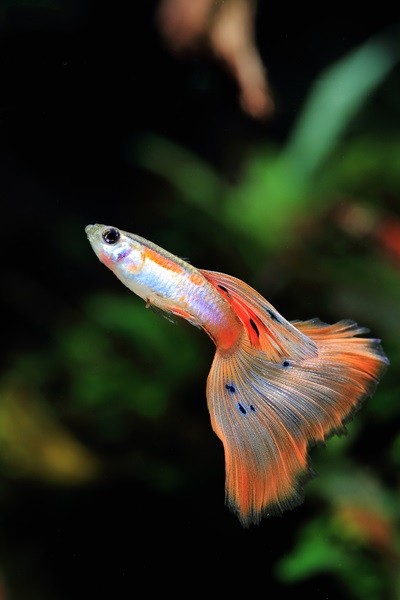 The Guppy is one of the most well known and popular aquarium fish for both beginners and advanced aquarists. They add plenty of color to aquariums, ponds, terratiums, and are peaceful, relatively cheap and very easy to maintain.

In this blog, we will be looking at everything about Guppies: How to care for them, their perfect diet, habitat and tanks mates for them, how to breed them, and much more.

Before we dive in, have a look at the summary table below to see if this fish is for you. 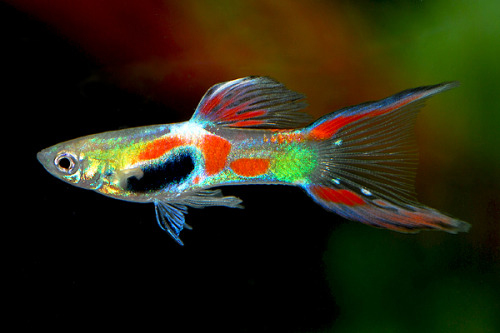 There are almost 300 varieties of Guppies. They come in all different types of colors, sizes and tail shapes.

Their name derives from Robert John Lechmere Guppy, who found them in Trinidad back in 1866. It was taken back to British Museum and given the name Girardinus guppii, by an Ichthyologist. Since then, the fish has undergone a few name changes, including Lebistes reticulatusand is now known as Poecilia reticulata.

As well as the beautiful color and active nature they bring to the tank, they have also been used in freshwaters in Asia to control the mosquito population; however in some cases their release had a negative impact on the native fish populations.

Guppies in an Aquarium 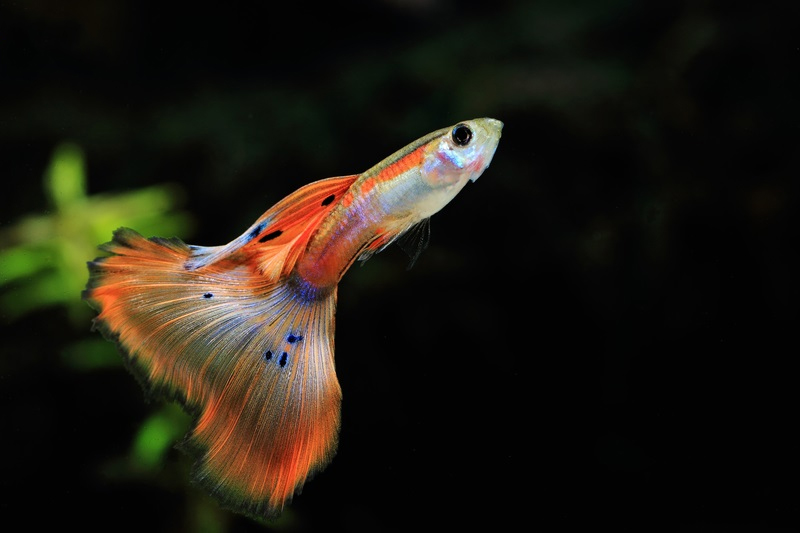 Guppies are peaceful fish that like to be kept in groups. They’re active swimmers and pretty much move around all the time. You’ll often see the males chasing the females trying to impress them by wiggling their fins.makemyhobby.com

If your fish are constantly hiding, it could be an indication that they are stressed or ill.

These brightly colored male guppies will be sent out in an insulated box with special water to ensure the water stays within the parameters, to help during transport.

Get Your Fish Now

As we’ve already mentioned, Guppies come in many different colors and sizes, with different shaped tails too.

In the wild, females are typically grey and males have colorful stripes, spots or splashes in a wide range of colors. There are so many aquarium varieties due to breeders creating new strains with brighter colors and more mmh patterns on their bodies and tails; even today, there are still new varieties being introduced.

Males are typically smaller than the females, averaging between 0.6-1.4 inches, whereas females are around 1.2-2.4 inches long. These fish are sexually dimorphic, which means you can tell the males from the females just by looking at them. We’ll discuss more on how to do this in the breeding section.

These fish come in almost every color imaginable, which is where they get the nickname ‘Rainbow Fish’. They are normally a paler color on the top and upper half of the body, and the rear part is usually a brighter, more vivid color.

Some varieties can also look metallic. They have iridophores which are cells that don’t have color, and reflect light which creates an iridescent effect. 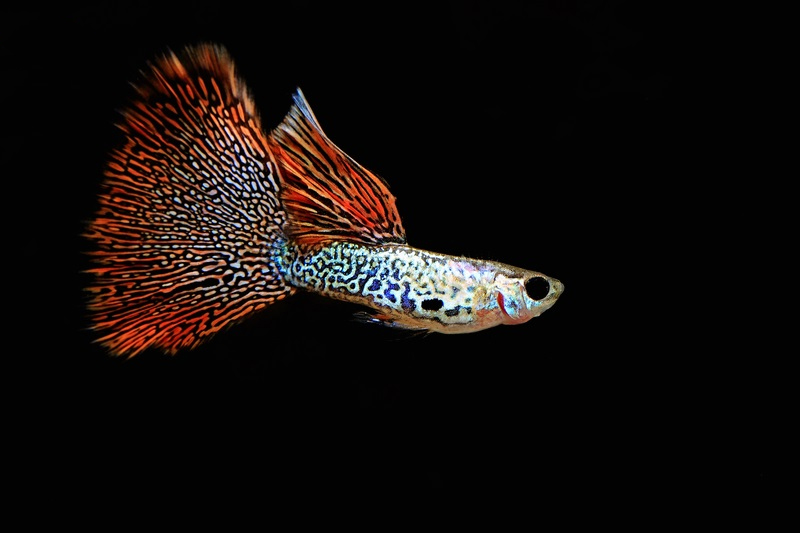 Some are a solid in color; others have a pattern over their main body color. Examples include:

Again, the tail can also be either a solid color or patterned. Here are some examples: 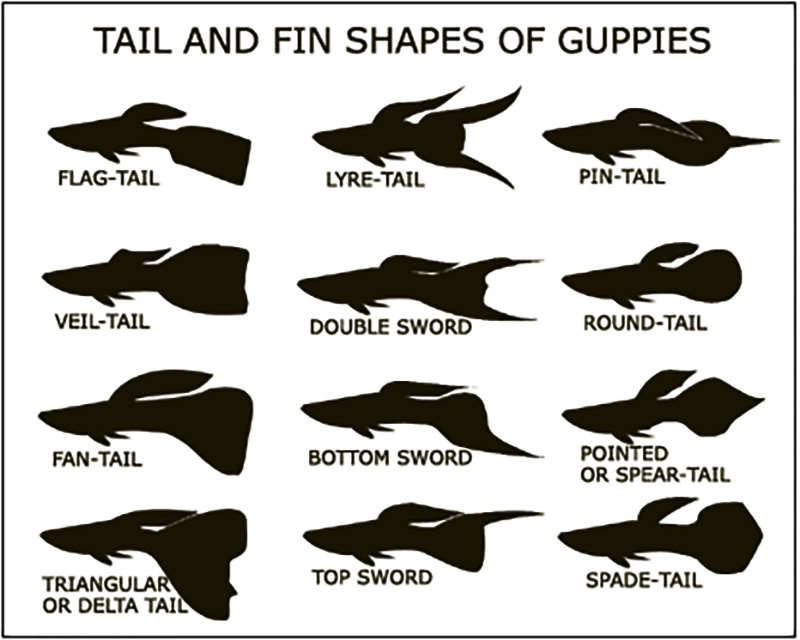 You’ll find a wide variety of tail shapes too including:

Their natural habitat is in the warm freshwaters of South America, so it’s important to replicate these conditions into your tank to provide them with the most natural environment possible.mmh As with any fish tank, you always need to make sure that the tank is set up correctly, and that the water is properly cycled.mmh This ensures you have the appropriate bacteria which will convert harmful compounds into less harmful ones.

Most people choose a 35 Liters tank to keep Guppies in, but you can keep them in a 17 to 18 Liters, or anything upwards of a 35 Liters. You’ll need to use a heater to keep the water in between 24 to 28 C. Always place your heater at one end of the tank, and a thermometer at the other end to check that the water is heated through consistently.

As with the majority of fish, you’ll also need a filter. The type you choose will fall down to the size of your tank and your personal preference. A hang on back filter will be fine for most set ups. If you keep your fish in a large tank (bigger than 120 to 150 Liters) you might want to consider using an external canister filter.

Where to buy Filter

A Show Tank:
Plant the tank up with plenty of live plants, rocks and substrate. Ideal plants to keep these fish with include Mosses, Grasses and Bulb Plants. The type of substrate you choose is entirely down to personal preference. Guppies spend the majority of their time in the middle or top section of the tank. 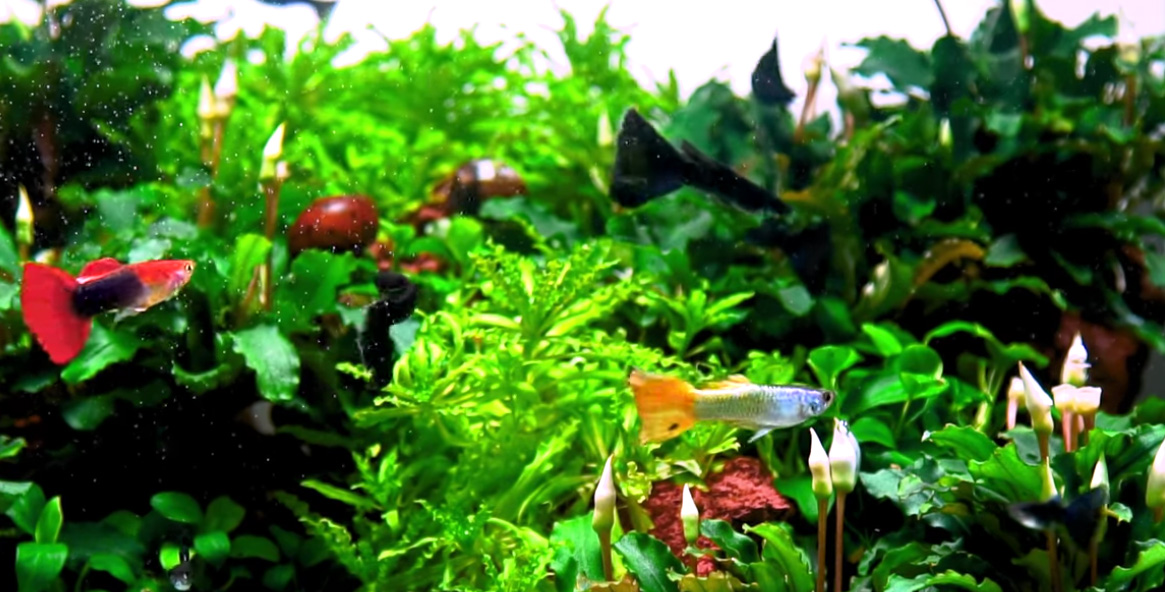 Breeding Tank:
Keep your tank bare bottomed, that way uneaten food can be sucked out easily. Use floating plants, such as Limnobium Laevigatum to create a place for your fry to hide in. The plants also help aid filtration.

As we mentioned earlier, if your adult fish are constantly hiding – it may be a sign that they are stressed, they should usually be found swimming in the open.

Regardless of the setup, make sure you clean your tank weekly, and perform partial water change of around 25%.

The most common tank mates for a Guppy, is more Guppies!

The majority of people who keep this fish do so because they like the vibrant colors of the males. If you’re only keeping them for their looks, we recommend that you keep males only.

They can also be kept with other peaceful community fish such as Mollies, Platies, Gouramis, Corydoras and peaceful tetras. Almost all livebearers such as endler’s livebearers and swordtails can make ideal tank mates for them too.

You should avoid housing them with larger aggressive species, especially if they’re likely to make a meal of them. Keep them away from species such as Red Tailed Sharks, Barbs and aggressive Tetras. They will nip at their fins.

If you want to keep them with other non-fish animals, you could house them with Ghost Shrimp or African Dwarf Frogs.

Fancy Guppy was specifically developed to meet the nutritional requirements for your Guppy fish.

Get Your Food Now

The food that fish eat depends on what’s available in their natural environment as well as their anatomy.

Guppies are omnivores, which means they eat both plant and animal matter. They are not fussy eaters and will eat whatever you give them, including mosquito larvae.

Their main diet should be good quality fish flakes. Ensure you choose a product which is high in protein, and not filler foods. Avoid fish flakes which have fillers such as wheat and soy listed as the first few ingredients.

To supplement the fish flakes you can feed your fish either live or frozen foods such as shrimp and bloodworms. makemyhobby.comYou can also give them vegetables such as peas, lettuce and cucumber.

You should feed your fish once or twice a day, and only an amount of food which they can eat within two minutes. Don’t feed your fish only one type of food because this will lead to nutrient deficiencies. You should alternate between flake food, live/frozen food and vegetables. You could feed them flakes in the morning and an alternative in the evening.mmh

If you over feed your fish, this can lead to problems with their health and affect the water quality in your tank. By following the rule above, there shouldn’t be any leftover food in the tank, but if there is – you can just remove it using a net so it doesn’t settle on the floor and start rotting.

If you have fry in the tank, you’ll also need to think about how to feed them.

They will need to be fed smaller amounts, more frequently. You can feed them either the same foods as the adults, but crushed up, or you can buy specific fry food.

This Breeding Box provides an ideal place for Guppies to lay their offspring, and also for the fry to hide out in providing a safe area for them. 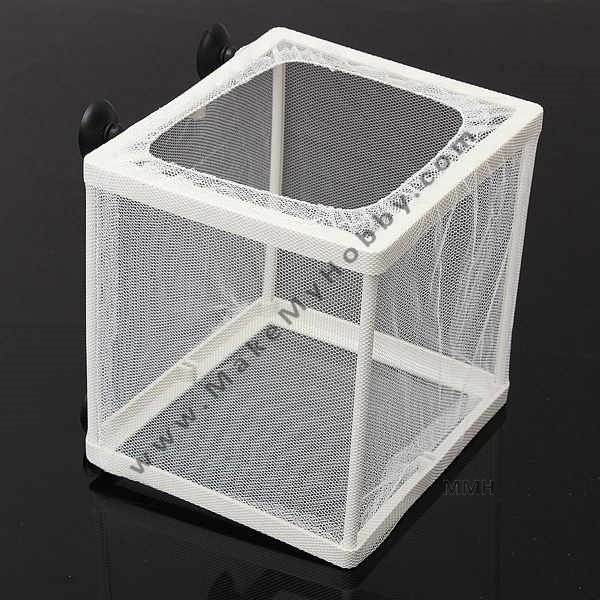 Get Your own Breeding Box Now

Guppies breed like crazy. They are certainly not shy, and will most likely breed without any input from you. There are lots of different ways that fish breed. Guppies are ovoviviparous, which means that the females grow the fish inside their bodies, inside an egg.

The baby fish use the egg sac for nourishment, and once they have absorbed that they hatch inside the female and the female gives birth to live young.

It’s really easy to sex these fish once they reach sexual maturity (between three and five months). They have a number of tell-tale signs:

So how do they actually breed?

It is thought that males are able to determine which females are virgin and which are already pregnant.

The male fish makes brief contact with the female and fertilization occursmmh when he passes a package of sperm known as spermatophores into the females.  The packet then splits up in to thousands of sperm and the female store this to create a number of broods. She can have multiple pregnancies from only one fertilization over a period of time.

How to Sex Guppies

It takes between four and five days from when the egg is fertilized to the embryo being nearly completely formed.  For the rest of the gestation period, the fish develop organs. The gestation period is usually between 21 and 30 days. Towards the end of her pregnancy you may be able to see the eyes of the babies through her translucent skin.

Once she gives birth to the live fry, the process will then repeat again, and she’ll give birth in a further 21-30 days.

As we mentioned earlier, if you have a female and male Guppy in a tank they are likely to breed regardless of any input you have.

You can either choose to put the female in a breeding trap, use a breeding tank around a week before she is due to give birth, or remove the female fish once the fry are born to prevent her from eating them.

If you choose to use a breeding trap, we don’t recommend you use the small plastic ones available; they stress fish out. Instead make your own larger trap to give her plenty of space to swim. Include holes for the fry to swim out of.  If you place her in a breeding trap which is too small you’ll stress her out and this may lead to a miscarriage.

When using a specific breeding tank, keep the bottom of the tank bare, and use plants such as Java moss which allow the fry to hide. 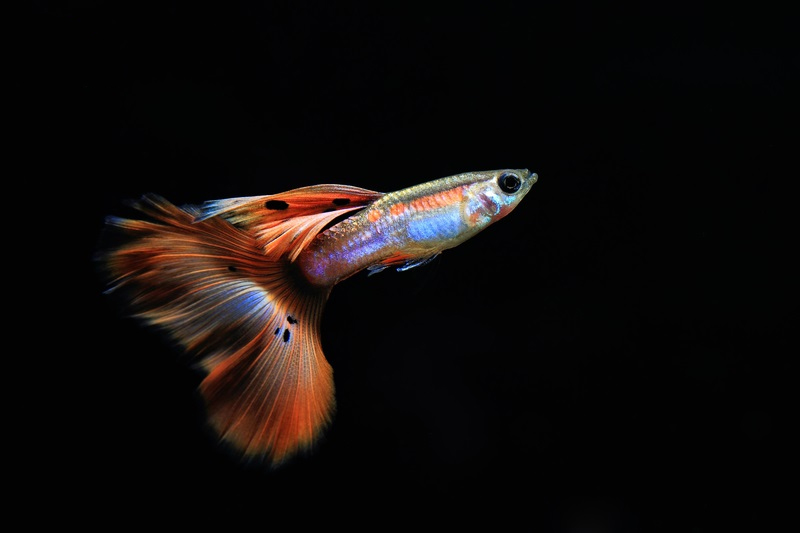 Guppies are very hardy fish; however their long tails can make them prone to fungal infections. Ich is common amongst these fish. This is a disease where small white dots grow on the fish’s skin and you’ll notice them rubbing their bodies against objects.

To get rid of ich, you can use medication available from this section.

They are also prone to fin rot; the tail will look likes it’s torn. Again, this can be treated with medication, and prevented by choosing suitable tank mates who won’t nip.

To reduce the chance of disease entering your tank:

Guppies are a very colorful and peaceful fish, perfect for both beginners and experienced fish keepers.

They are hardy and make an ideal first time fish, but also come in a wide range of colors, patterns and tail shapes which makes them appealing to experienced fish breeders.

Keep their water clean, and provide them with a well-balanced diet and you’ll be rewarded with a group of entertaining, active swimmers for your tank.