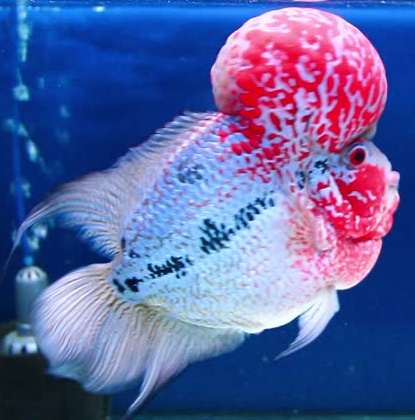 Flowerhorn cichlids are ornamental aquarium fish noted for their vivid colors and the distinctively shaped heads for which they are named. Their head protuberance, or kok, is formally termed a nuchal hump. Like blood parrot cichlids, they are man-made hybrids that exist in the wild only because of their release.mmh First developed in Malaysia, Thailand, and Taiwan, they became very popular with Asian fish hobbyists. They are also kept by hobbyists in the US and Europe. Numerous cast-off flowerhorns have been released to the wild, especially in Singapore and Malaysia, where they have become an invasive pest animal.

Flowerhorn breeding dates from 1993. Malaysians admired fish with protruding heads, known as kaloi or 'warships', found in the western part of the nation. The slightly protruding forehead and long tail of these fish were prized in Taiwanese society as bringing luck in geomancy. By 1994, red devil cichlids (typically Amphilophus labiatus) and trimac cichlids (Amphilophus trimaculatus) had been imported from Central America to Malaysia and the hybrid blood parrot cichlid had been imported from Taiwan to Malaysia and bred these fish together, marking the birth of the flowerhorn.

In 1995, the blood parrots were further crossbred with the Human Face Red God of Fortune, which produced a new breed called the Five-colors God of Fortune. With its beautiful colors, this fish quickly became popular. Selective breeding continued through 1998, when the Seven-colors Blue Fiery Mouth (also known as Greenish Gold Tiger) was imported from Central America, and crossbred with the Jin Gang Blood Parrot from Taiwan. This crossbreeding led to the first generation of hua luo han flowerhorn hybrids (often generically called luohans in English), which were then followed by subsequent flowerhorn introductions.

When luohans were first imported to the United States, there were only two varieties of these fish for distribution, flowerhorn and golden base. Flowerhorns came in two varieties, those with pearls (silver-white spots on the skin) and those without. Golden bases also had two varieties, those that faded and those that did not. Among the flowerhorns, the ones without pearls were quickly overtaken in popularity by those with pearls, becoming pearl-scale flowerhorns, which were developed into the Zhen Zhu variety. Within the golden bases, the unfaded ones developed an attractive golden skin in place of what had been the flowerhorn’s grey skin.

By 1999, there were four varieties of flowerhorn available in the American market: regular flowerhorns, pearl-scale flowerhorns, golden flowerhorns, and faders.mmh Commercial breeders proliferated, and fish were selected for appearance with little regard for terminology. Consequently, names became confusing and parentage became difficult to track.

Around 2000 to 2001, the Kamfa variety appeared.makemyhobby These were hybrids of any type of flowerhorn crossed with any species of the genus Vieja or with any parrot cichlid. These brought in some new traits, such as short mouths, wrapped tails, sunken eyes, and increasingly larger head bumps. Seeing this, those who bred the Zhen Zhus began line breeding their fish to develop faster and become more colorful, in order to compete with the Kamfa strains.

Flowerhorn cichlids have a lifespan of 10–12 years. They are usually kept at a water temperature of 80–85 °F, and a pH of 7.4–8.0. They require a tank of a minimum of 55 gallons, with 125 gallons optimal. A breeding pair may require a tank of 150 gallons or more, depending on size. Being aggressive and territorial, two or more flowerhorns are usually not kept together, but the tank housing them can be divided up with acrylic dividers or egg crates.

There are several ways by which breeders distinguish between male and female flowerhorns. Generally, the males are larger than the females, but there are some exceptions. Males have the kok, or the nuchal hump, on their foreheads. Males also usually have brighter and more vivid colors. For most breeds, the females have black dots on their dorsal fins, whereas males usually have longer anal and dorsal fins. Females tend to have an orange belly, especially when ready to breed. The mouth of the male is thicker and more pronounced than the female's. One sure way to determine the sex of flowerhorn is that grown female will lay eggs every month even without the male.

The original flowerhorn hybrid stock are referred to as luohans (from the Chinese word for the Buddhist concept of arhat). The four main derived varieties are Zhen Zhu, Golden Monkey, Kamfa, and the golden base group, which includes Faders and the Golden Trimac. They are sometimes referred to as breeds, though that term technically only refers to varieties of fully domesticated species. 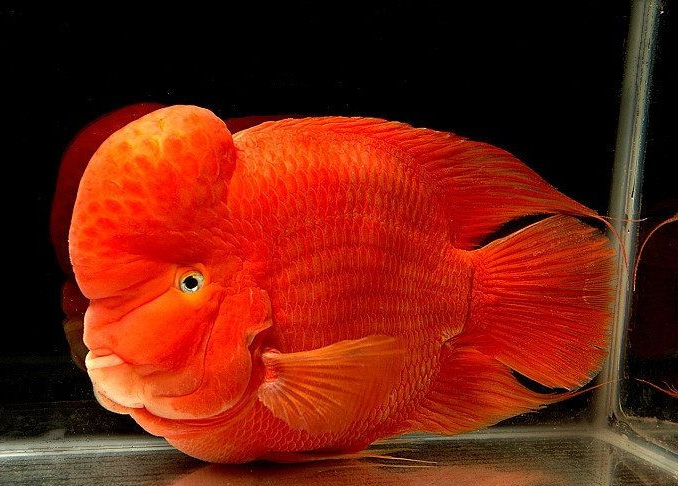 Blood parrot cichlids were the earliest defined type of cichlid hybrid, whereas the King Kong Parrot represents an early stage in the transition to flowerhorn breeding. The blood parrots are smaller, with a bigger head, more protruding eyes, and a V-shaped mouth. The King Kong Parrot is longer, with a reddish orange color, and a dorsal fin shorter than the anal fin. The shape of the King Kong is similar to the red devil cichlid, and, when it reaches a size of 18 cm, the shape of the mouth changes to a triangle with a more protruding jaw. Only 20% of these fish grow to a size of a half kilogram.

The Red Mommon and Red Ingot grow faster in the first year, with a size of about 20 cm. They grow to 25–28 cm by two years later. Their maximum size is not yet known, and it is believed that the fish may grow to 30 cm or above in the future. Both of these fish are raised at 28 °C water temperature, pH ~6–8 (with slightly acid water preferred), and kH ~3–6, while avoiding any sudden change in water quality. It is also common to test regularly for ammonia and nitrite. Both of these fishes can be bred with different kinds of cichlids. 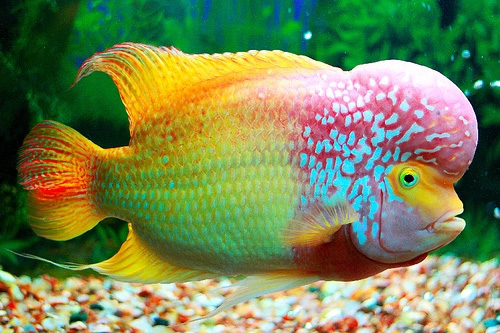 The genuine Golden Monkey (also called Good Fortune) or Kamalau was bred by Lam Seah and Lam Soon in Bercham, Ipoh, Malaysia. After the third generation, all of them were sold to the A-1 Aquarium in 2001. This type of flowerhorn is an original luohan-based fish and not a mixed-type Zen Zhu or Kamfa.

It can be a particularly expensive flowerhorn, carrying a price tag of more than one thousand dollars. The most expensive Golden Monkey was sold for $600,000 dollars during a Malaysian exhibition in 2009. 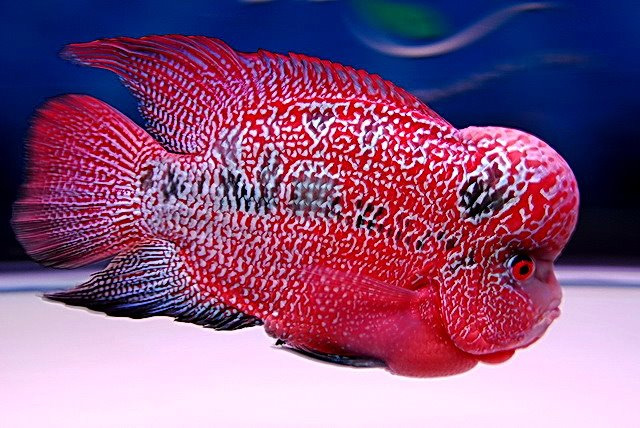 This variety originated directly from the luohan. Its main characteristics are white or yellow eyes (red eyes are possible but not common), a fan tail, a water-colored head bump, sunken eyes, and smaller lips than the Zhen Zhu. This variety generally also has a larger and more square body than that of the Zhen Zhu. Head flowers can be found on the Kamfa, but not as prominently as with Zhen Zhus. 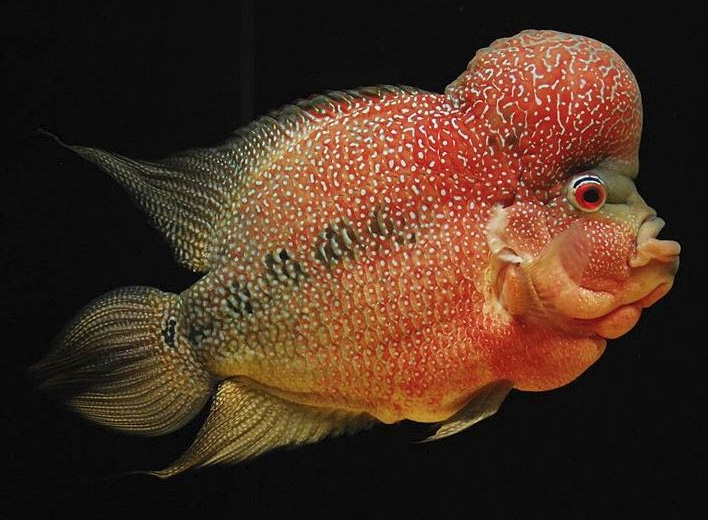 This variety originated slightly after the Kamfa, derived from the luohan. It has a rounded tail, large mouth, red protruding eyes, and a prominent head flower. Zhen Zhu means 'pearl flowerhorn'. This variety's strongest characteristic is pearling. Breeders often cross other types with Zhen Zhus because they breed easily and can create better pearling (flowerline) for the next generation. Weak tails can also carry over, however. 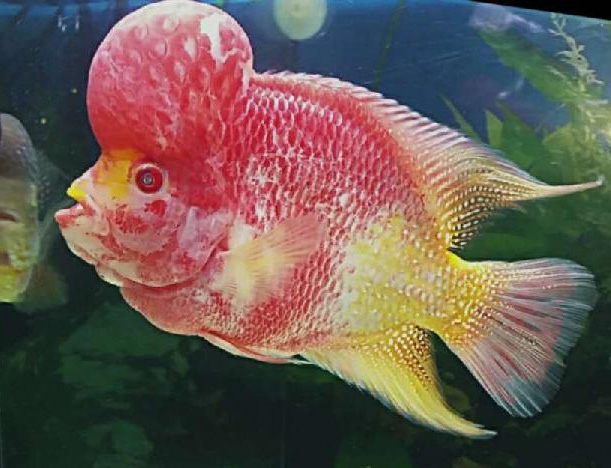 Golden base is a group of multiple varieties, including Faders and Golden Trimac. Faders are called by that name because during the juvenile period of life they first lose their color and go completely black then, as the fading process continues, the black fades away, leaving a more vibrant color, usually yellow or red.

Red Texas cichlids are related to the golden base family of flowerhorns. They were originally created by breeding a green Texas cichlid with a Mommon or King Kong parrot, then crossing the offspring back to the parents until a consistent red color was achieved. Hobbyists consider the most important feature of the red Texas to be the color. Red Texas cichlids range in colors, and are rated as:

The second characteristic that sets the red Texas apart is the pearling. Red Texas can vary greatly in terms of the type of pearling. 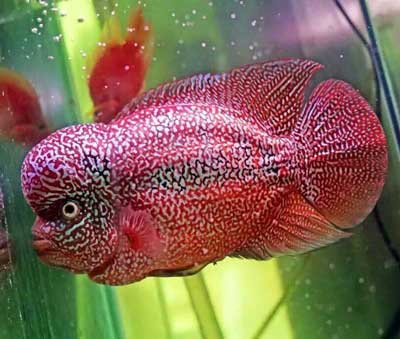 From the Kamfa family, this fish typically has white or yellow sunken eyes, although red eyes are possible but rare. Distinctive features of this strain include an intense black double flower row along the lateral line, and very thick white pearling. Originating in Thailand, this strain has seen a recent rebirth in Vietnam. The body is typical of a Kamfa, with a fan tail, and a longer body than some other Kamfas. King Kamfa is the most expensive flowerhorn strain. 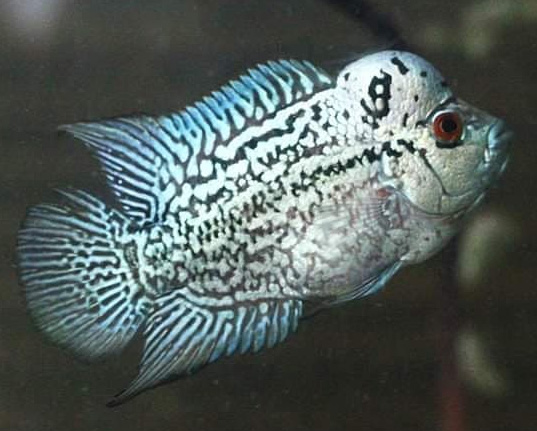 This is a cross of a Kamfa male and a Malau female. The body and face resemble a typical Kamfa. The finnage and sunken eyes reflect the Kamfa genes. The main feature of a Kamfamalau is the pearling. Fins typically take on a "frosted" pearl look that is rarely found in any other varieties of flowerhorn. Pearling usually crosses all the way across the head bump, another rarity in flowerhorn varieties. This strain should display the best characteristics of both Kamfa and Malau. 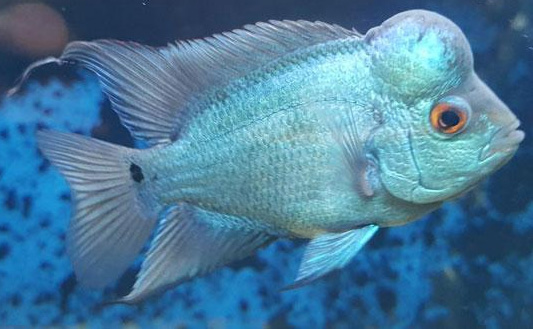 The Thai Silk, also known as Titanium, is a relatively new strain which is almost completely metallic blue, gold, or white. Its origins are unclear. A new strain of Thai silk has been developed that has a kamfa-type body and red, blue, or white eyes. It was believed to be a cross between White Tigers (Texas lineage), pure Texas cichlid and a Vieja.

Amazing fishI got my flowerhorn form here five years ago from makemyhobby, and he’s still alive to this day, he’s about 8 to 9 inches long, he’s a very active fish, and enjoys resting on his flouting rock layout. I really recommend this fish.

Excellent petYou must always research before buying any pet. Bought my flowerhorn two months ago and it is living happily in his 8Ltr tank with filter. Aquatics specialist was very helpful in answering all my questions. flowerhorns are very simple to take care of and I would recommend them highly to anyone who would want a easy to care for first time fish

DO YOUR OWN RESEARCH!I have had my flowerhorn for a few weeks now, and I have named him Garv. Garv is doing wonderfully in a 25 Ltr tank! I do NOT recommend you get a tank thats any smaller. It is a myth that flowerhorns can survive in a small tank. Also, YES, YOUR FLOWERHORN SHOULD HAVE A HEATER. ESPECIALLY IF YOU LIVE IN A COLDER THAN AVERAGE HOUSE. flowerhorn's CAN survive in room temperature water (18 degrees or so) but they will be EXTREMELY stressed! This means your flowerhorn fish will not survive long at all! Please take care of your new friend! Lets stop treating fish like decorations for your home and as actual living, breathing animals!