Menu
Your Cart
20% OFF on products Shop now 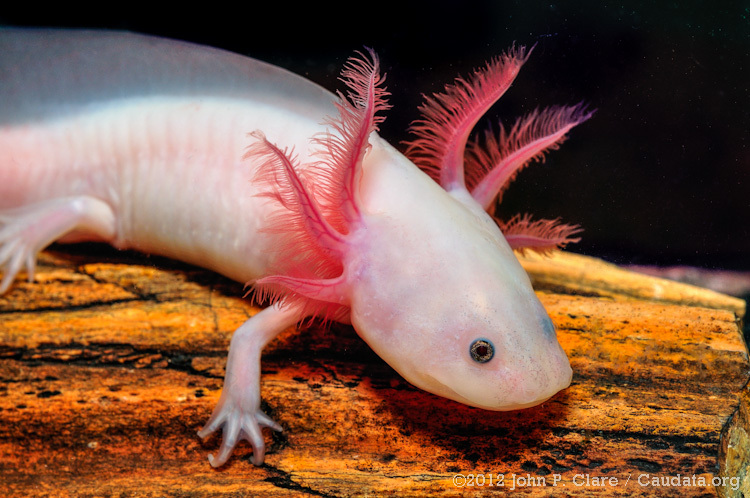 The axolotl (pronounced ACK-suh-LAH-tuhl) salamander has the rare trait of retaining its larval features throughout its adult life. This condition, called neoteny, means it keeps its tadpole-like dorsal fin, which runs almost the length of its body, and its feathery external gills, which protrude from the back of its wide head.

Differences From Other Salamanders

Found exclusively in the lake complex of Xochimilco (pronounced SO-chee-MILL-koh) near Mexico City, axolotls differ from most other salamanders in that they live permanently in water. In extremely rare cases, an axolotl will progress to maturity and emerge from the water, but by and large, they are content to stay on the bottom of Xochimilco’s lakes and canals.
Close relatives of the tiger salamander, axolotls can be quite large, reaching up to a foot in length, although the average size is closer to half that. They are typically black or mottled brown, but albino and white varieties are somewhat common, particularly among captive specimens. 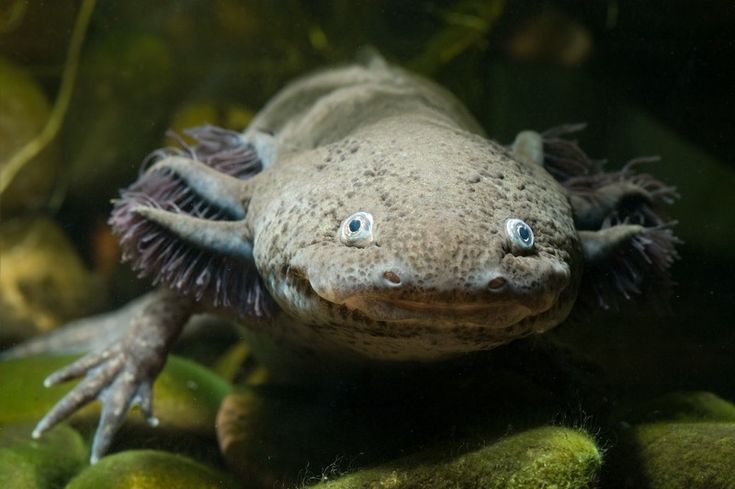 A sexually mature adult axolotl, at age 18–24 months, ranges in length from 15 to 45 cm (6 to 18 in), although a size close to 23 cm (9 in) is most common and greater than 30 cm (12 in) is rare. Axolotls possess features typical of salamander larvae, including external gills and a caudal fin extending from behind the head to the vent. External gills are usually lost when salamander species mature into adulthood, although the Axolotl maintains this feature. This is due to their neoteny evolution, where axolotls are much more aquatic than other salamander species.
Their heads are wide, and their eyes are lidless. Their limbs are underdeveloped and possess long, thin digits. Males are identified by their swollen cloacae lined with papillae, while females are noticeable for their wider bodies full of eggs. Three pairs of external gill stalks (rami) originate behind their heads and are used to move oxygenated water. The external gill rami are lined with filaments (fimbriae) to increase surface area for gas exchange. Four-gill slits lined with gill rakers are hidden underneath the external gills, which prevent food from entering and allows particles to filter through.
Axolotls have barely visible vestigial teeth, which develop during metamorphosis. The primary method of feeding is by suction, during which their rakers interlock to close the gill slits. External gills are used for respiration, although buccal pumping (gulping air from the surface) may also be used to provide oxygen to their lungs. Buccal pumping can occur in a two-stroke manner that pumps air from the mouth to the lungs, and with four-stroke that reverses this pathway with compression forces. 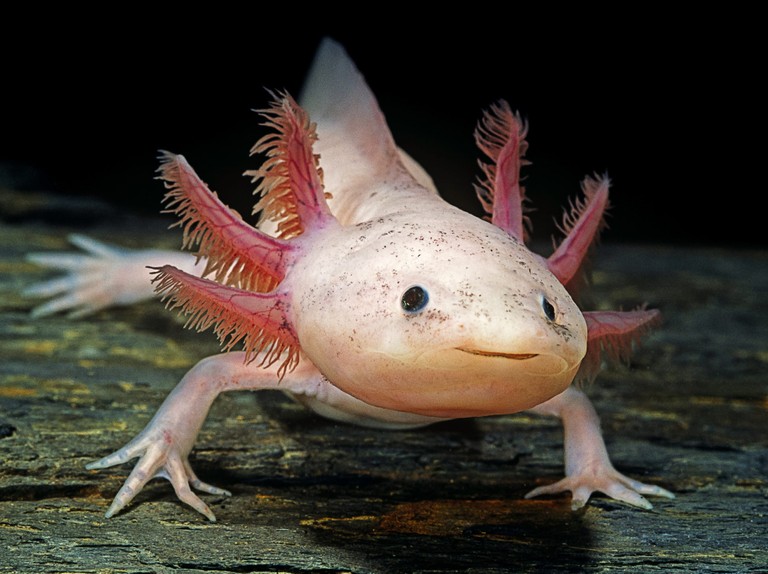 Axolotls have four pigmentation genes; when mutated they create different color variants. The normal wild-type animal is brown/tan with gold speckles and an olive undertone. The five more common mutant colors are leucistic (pale pink with black eyes), golden albino (golden with gold eyes), xanthic (grey with black eyes), albino (pale pink/white with red eyes) in which is more common in axolotls than some other creatures and melanoid (all black/dark blue with no gold speckling or olive tone). In addition, there is wide individual variability in the size, frequency, and intensity of the gold speckling and at least one variant that develops a black and white piebald appearance on reaching maturity. Because pet breeders frequently cross the variant colors, double homozygous mutants are common in the pet trade, especially white/pink animals with pink eyes that are double homozygous mutants for both the albino and leucistic trait. Axolotls also have some limited ability to alter their color to provide better camouflage by changing the relative size and thickness of their melanophores.
The axolotl is only native to the freshwater of Lake Xochimilco and Lake Chalco in the Valley of Mexico. Lake Chalco no longer exists, having been drained as a flood control measure, and Lake Xochimilco remains a remnant of its former self, existing mainly as canals. The water temperature in Xochimilco rarely rises above 20 °C (68 °F), though it may fall between 6 and 7 °C in the winter, and perhaps lower.
Surveys in 1998, 2003, and 2008 found 6,000, 1,000, and 100 axolotls per square kilometer in its Lake Xochimilco habitat, respectively. A four-month-long search in 2013, however, turned up no surviving individuals in the wild. Just a month later, two wild ones were spotted in a network of canals leading from Xochimilco.
The wild population has been put under heavy pressure by the growth of Mexico City. The axolotl is currently on the International Union for Conservation of Nature's annual Red List of threatened species. Non-native fish, such as African tilapia and Asian carp, have also recently been introduced to the waters. These new fish have been eating the axolotls' young, as well as their primary source of food.
Axolotls are members of the tiger salamander, or Ambystoma tigrinum, species complex, along with all other Mexican species of Ambystoma. Their habitat is like that of most neotenic species—a high-altitude body of water surrounded by a risky terrestrial environment. These conditions are thought to favor neoteny. However, a terrestrial population of Mexican tiger salamanders occupies and breeds in the axolotl's habitat.
The axolotl is carnivorous, consuming small prey such as molluscs, worms, insects, other arthropods, and small fish in the wild. Axolotls locate food by smell, and will "snap" at any potential meal, sucking the food into their stomachs with vacuum force. 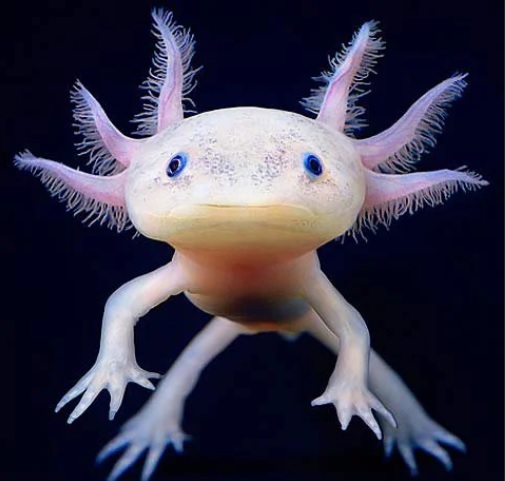 Today, the axolotl is still used in research as a model organism, and large numbers are bred in captivity. They are especially easy to breed compared to other salamanders in their family, which are rarely captive-bred due to the demands of terrestrial life. One attractive feature for research is the large and easily manipulated embryo, which allows viewing of the full development of a vertebrate. Axolotls are used in heart defect studies due to the presence of a mutant gene that causes heart failure in embryos. Since the embryos survive almost to hatching with no heart function, the defect is very observable. The axolotl is also considered an ideal animal model for the study of neural tube closure due to the similarities between human and axolotl neural plate and tube formation; the axolotl's neural tube, unlike the frog's, is not hidden under a layer of superficial epithelium. There are also mutations affecting other organ systems some of which are not well characterized and others that are. The genetics of the color variants of the axolotl have also been widely studied. 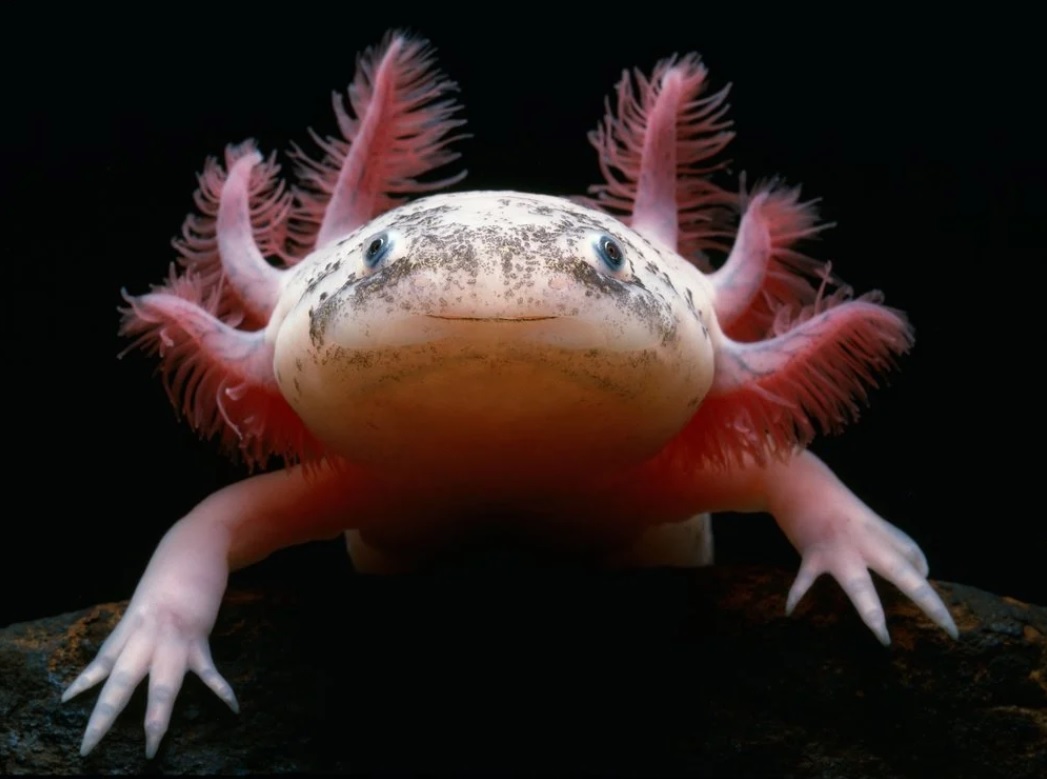 The feature of the axolotl that attracts most attention is its healing ability: the axolotl does not heal by scarring and is capable of the regeneration of entire lost appendages in a period of months, and, in certain cases, more vital structures, such as tail, limb, central nervous system, and tissues of the eye and heart. They can even restore less vital parts of their brains. They can also readily accept transplants from other individuals, including eyes and parts of the brain—restoring these alien organs to full functionality. In some cases, axolotls have been known to repair a damaged limb, as well as regenerating an additional one, ending up with an extra appendage that makes them attractive to pet owners as a novelty. In metamorphosed individuals, however, the ability to regenerate is greatly diminished. The axolotl is therefore used as a model for the development of limbs in vertebrates. There are three basic requirements for regeneration of the limb. The wound epithelium, nerve signaling, and the presence of cells from the different limb axes. A wound epidermis is quickly formed by the cells to cover up the site of the wound. In the following days, the cells of the wound epidermis divide and grow quickly forming a blastema, which means the wound is ready to heal and undergo patterning to form the new limb.
It is believed that during limb generation, axolotls have a different system to regulate their internal macrophage level and suppress inflammation, as scarring prevents proper healing and regeneration. However, this belief has been questioned by other studies. 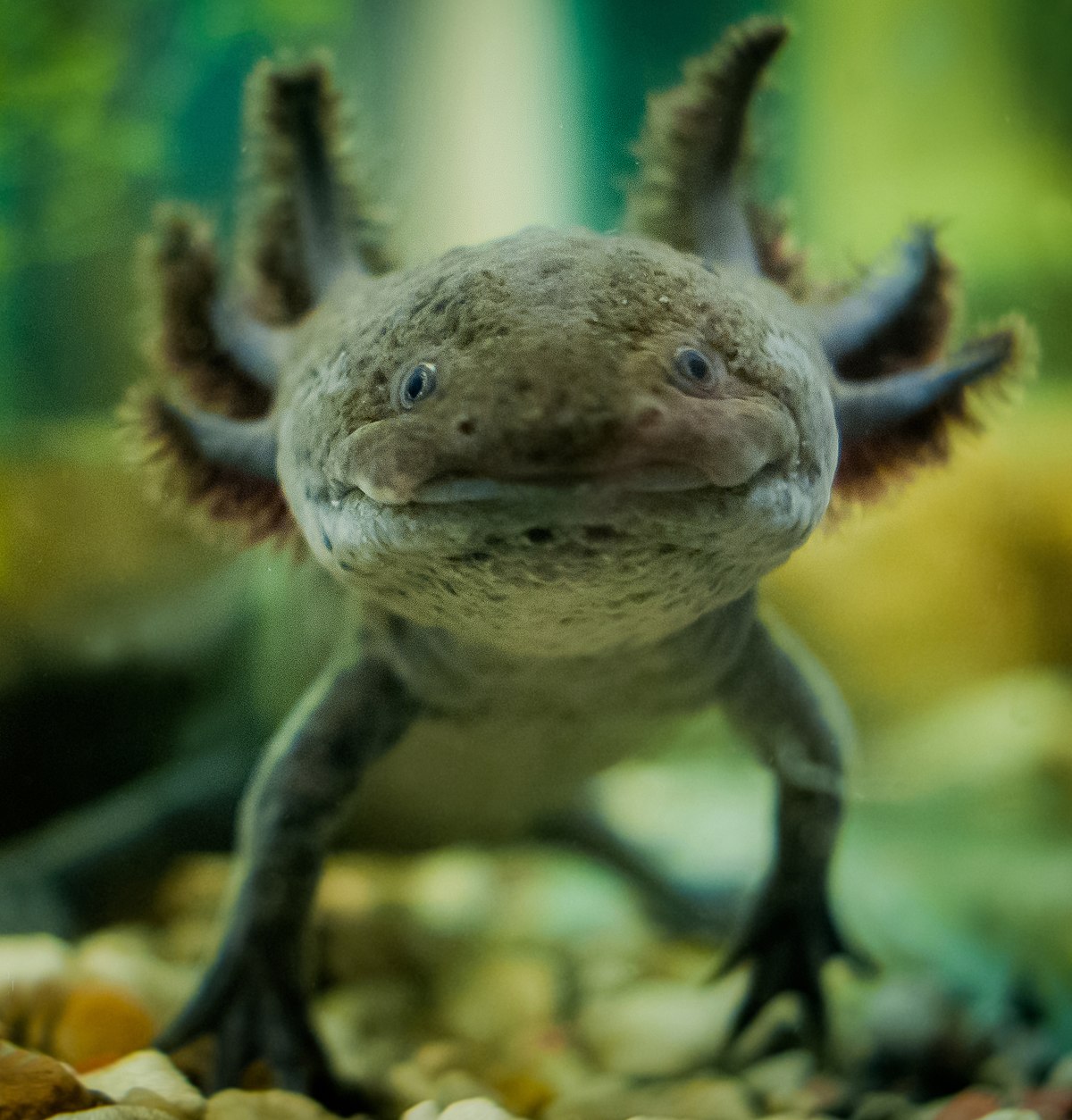 The axolotl is a popular exotic pet like its relative, the tiger salamander (Ambystoma tigrinum). As for all poikilothermic organisms, lower temperatures result in slower metabolism and a very unhealthily reduced appetite. Temperatures at approximately 16 °C (61 °F) to 18 °C (64 °F) are suggested for captive axolotls to ensure sufficient food intake; stress resulting from more than a day's exposure to lower temperatures may quickly lead to disease and death, and temperatures higher than 24 °C (75 °F) may lead to metabolic rate increase, also causing stress and eventually death. Chlorine, commonly added to tap water, is harmful to axolotls. A single axolotl typically requires a 150-litre (40-US-gallon) tank. Axolotls spend the majority of the time at the bottom of the tank.

Salts, such as Holtfreter's solution, are usually added to the water to prevent infection.

In captivity, axolotls eat a variety of readily available foods, including trout and salmon pellets, frozen or live bloodworms, earthworms, and waxworms. Axolotls can also eat feeder fish, but care should be taken as fish may contain parasites.

Substrates are another important consideration for captive axolotls, as axolotls (like other amphibians and reptiles) tend to ingest bedding material together with food and are commonly prone to gastrointestinal obstruction and foreign body ingestion. Some common substrates used for animal enclosures can be harmful for amphibians and reptiles. If gravel (common in aquarium use) is used, it is recommended that it consist of smooth particles of a size small enough to pass through the digestive tract. One guide to axolotl care for laboratories notes that bowel obstructions are a common cause of death, and recommends that no items with a diameter below 3 cm should be available to the animal.

There is some evidence that axolotls might seek out appropriately-sized gravel for use as gastroliths based on experiments conducted at the University of Manitoba axolotl colony.